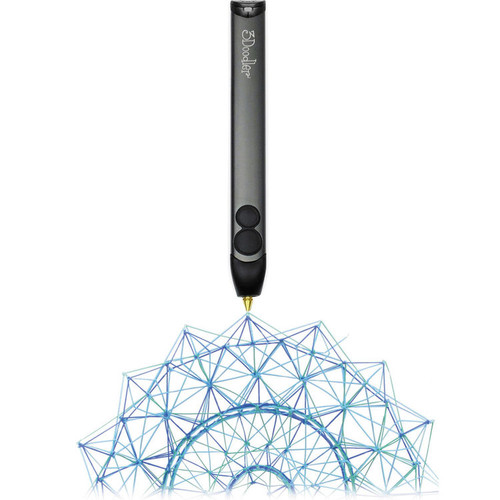 Re-engineered and optimized, the 3Doodler 2.0 from 3Doodler is the second-generation 3D Printing Pen that is slimmer, lighter, quieter, and easier to use. Improvements on the original 3Doodler Pen include a redesigned nozzle for greater accuracy, temperature control for manual adjustment and optimization, double-click speed controllers for continuous flow, and an improved drive system for smoother filament extrusion.

The 3Doodler 2.0 extrudes heated plastic, which quickly cools and solidifies into a stable structure. Suitable for both right- and left-handed use, the pen can be used to draw flat forms on paper that can be peeled off, or it can draw 3D objects in mid-air. Because 3Doodler filament adheres to other plastics, you can also use it to decorate and personalize items, weld together traditionally-printed 3D objects, or repair small plastic items. The pen allows you to adjust the settings for either ABS or PLA filaments, both of which are supported by the 3Doodler 2.0, but require different temperatures to extrude. Two buttons also allow you to control the speed at which the plastic is extruded, which will affect the thickness and properties of the resulting doodle. For more advanced applications, there is a three-pin control port that allows you to control the speed buttons without manually touching the 3Doodler 2.0. Users can mount their 3Doodler 2.0 to a CNC arm or something similar using tape, for example, and use the control port to control the extrusion. The 3Doodler 2.0 comes with a detachable US power cord and can also be powered with the separately sold JetPack portable battery. Included with the 3Doodler 2.0 are two mixed packs of filament - the "Highlighter" color scheme in ABS, and "The Essentials" color scheme in PLA - for a total of 50 strands of filament, so you can start doodling right out of the box. The 3Doodler 2.0 is not recommended for young children, as the extruder can get significantly hot. The extruded plastic, however, is warm but touchable when it emerges from the tip of the 3Doodler.

Improvements in Version 2.0
The 3Doodler 2.0 features improvements and additions to the original 3Doodler. These include the following:

PLA and ABS Capability
The 3Doodler 2.0 is compatible with both ABS and PLA plastics. Since these materials melt at different temperatures, the 3Doodler 2.0 has two heat settings - choose the correct setting when loading your 3Doodler 2.0.Both ABS and PLA plastics are suitable for building structures, freehand doodling, and drawing plastic on plastic. However, other applications are best suited to one or the other material. 3Doodler makes the following recommendations:Use ABS plastic for: Use PLA plastic for:

Adjustable Speed & Strength
The 3Doodler 2.0 has two speeds, controlled by pressing on the buttons on the body of the pen. These settings determine the flow of the plastic. Printing fast will result in a thicker stream of filament, allowing you to fill a large area quickly, or create a thicker, stronger piece that is less flexible but which may be able to support adjacent structures. Choosing the slow setting will result in a thinner stream of filament that is better suited for intricate designs that will be flexible but not particularly strong.

Get the latest updates on new products and upcoming sales