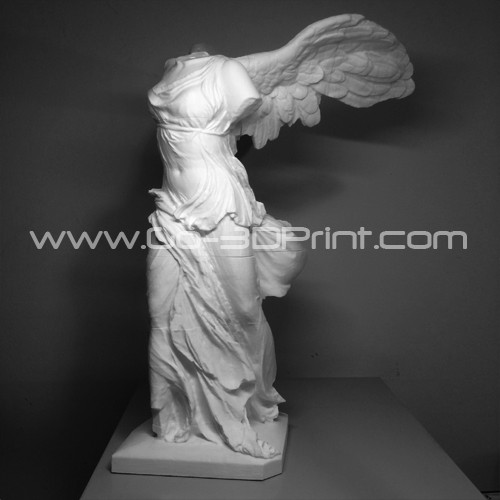 An iconic beacon of martial glamour, Winged Victory, the Nike of Samothrace is widely considered Hellenistic sculpture's greatest masterpiece. It was made between 200 and 190 BC, and more than a century ago important works of sculptural art like it were reproduced in plaster to be bought, sold, and traded by museums, universities, art schools, and private collectors around the world. In 1891, high-fidelity, full-scale, nine-foot-tall plaster casts of Winged Victory could be purchased from the Louvre's own atelier for 300 francs. The customs and commerce driving the plaster cast tradition largely died out in the early 1900s. Many significant cast collections were broken up, with some pieces lost or even deliberately destroyed. In 1892, a plaster of Winged Victory was carefully cast by the Louvre's atelier under the direction of its master mold maker Eugene Arrondelle and was purchased by the University of Basel. The Basel cast of Victory survives today at the Skulpturhalle Basel museum. In September 2013, with the museum's permission and the financial support of Autodesk's Reality Capture division, I spent a week working in the Skulpturhalle, taking 3D surveys of my choice of casts. I took hundreds of carefully staged photos of Victory and used Autodesk's ReCap Photo photogrammetry software to process them into this high-quality 3D model. Winged Victory is one of the world's most celebrated sculptures. It usually stands atop a stone warship's prow at the top of the Louvre's Daru staircase, where it oversees millions of visitors, but in September 2013 the Louvre removed Victory from public view while it undergoes an extensive, year-long restoration. That restoration effort will include a 3D survey, though the Louvre has not indicated whether they will freely publish the 3D data for which they are soliciting funds. While the original Victory is conspicuously missing, and as the Louvre contemplates what to do with their data, I am happy to provide my own. This capture is to my knowledge the first high-quality 3D survey of Winged Victory to be freely published, and I hope you enjoy direct access to this ancient, dramatic work's mystique. Francis Haskell, quoted above, continues, writing in Taste and the Antique that the Winged Victory of Samothrace "was singled out by Marinetti in his Futurist manifesto of 20 February 1909 as the symbol of the classical culture which the heroic new age of the machine gun and racing car would supercede." I hope this new, 3D captured, digitally published Winged Victory and all its 3D printed iterations might someday be seen as symbols of a new new age, and a different kind of futurism. Winged Victory of Samothrace by CosmoWenman is licensed under the Creative Commons - Attribution license.

Get the latest updates on new products and upcoming sales